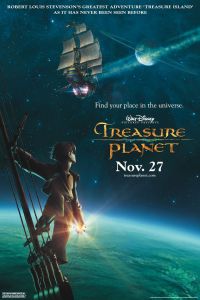 Treasure Planet offers the daring concept of combining worlds. It launches Robert Louis Stevenson classic novel into space, forces traditional animation with computer animation and offers up the struggle of being a kid and a man. Not all of these combinations work to the movie’s benefit. Being one of the costliest movies of all time sentences any film to a life of shame, and yet, even for all of its flaws, Treasure Planet is a far better result than its box-office figures. END_OF_DOCUMENT_TOKEN_TO_BE_REPLACED

As one of the most important films in animated history, ‘The Little Mermaid’ has some weight to carry as the years progress. The film that rejuvenated the Disney brand and ringed in a new era of animation certainly should hold up as well as some of the other classics. It both does and doesn’t. Ariel and her friends are still a prime example of the musical/animation hybrid that now defines Disney. However, in a increasingly more savvy, post-Shrek and Pixar world, the tale of the red headed beauty might be a little too sweet.
END_OF_DOCUMENT_TOKEN_TO_BE_REPLACED