Home on the Range is an easily forgettable cartoon from 2004 with a much larger footprint in animated history than it ever meant to. Once the final hand-drawn animated film to come out of Disney, the movie falls flat on almost everything ranging from story to jokes. However, it has one cultural significance that can easily overlooked: it features three grown, kick-ass women.

A little patch of history
It’s Spring 2003 when the unthinkable happens at Disney Animation: its hand-drawn animation department is closed in favour of the new technological possibilities of computer-generated imagery (CGI). It’s another controversial decision by studio heads after the proposed direction of “adventurous boy centered” movies unceremoniously flops with Dinosaur and Treasure Planet.

The Mouse House is a long way from the early ’90s Renaissance movies like Beauty and the Beast and The Lion King. Shortly after, CGI comes along and proves a smash success for competitors Pixar and DreamWorks. That’s why the last 2D animated movie to ever be released by Disney, which invented the art form in 1937 with Snow White and the Seven Dwarfs, was to be Home on the Range a Western featuring three cows. How the mighty have fallen.

A laughing stock
The movie is directed by Will Finn, who returned to Disney after doing the equally goofy but brotastic The Road to El Dorado (2000) for DreamWorks. Again the comedy consists of cheap shots, curtesy of its lead character Maggie (voiced by Roseanne Barr), But unlike Disney’s earlier attempt at courting the Shrek audience, The Emperor’s New Groove, it hardly ever surpasses the level of toilet humor. The conservative setting of the Old West where everybody is happy and barn animals sing until *yawn* the greed of commerce enters the realm, doesn’t help. 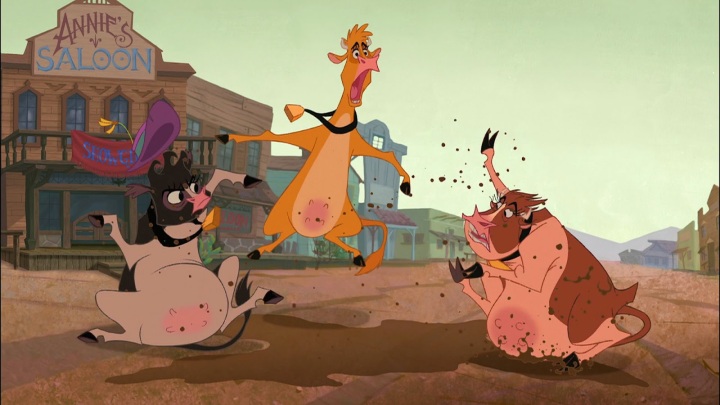 However, the movie biggest joke is ostensibly the premise itself: three cows work together to bring in a cattle rustler for the bounty in order to save their farm. The idea to feature cows was animated artist’s Michael LaBash after a different pitch of Mike Gabriel went nowhere. If there ever was an animal visually unappealing for a reasonably action packed road trip, it’s a cow. Yet here Home on the Range is, throwing its three leads into mines, rail roads and fist fights, lacking the quick paced self-awareness of both Shrek and The Emperor’s New Groove to let audiences know it’s in on the joke.

Beautifully forgettable
Home on the Range doesn’t carry the weight or responsibility of running hand-drawn animation into the ground. Nor is the movie responsible for the really inexplicable string of animated movies that came after it, be it from Disney itself (Chicken Little, Bolt) or DreamWorks (Over the Hedge, Flushed Away, Bee Movie) or Pixar (Ratatouille, Wall-E, Up), also featuring unconventional, seemingly dull and unfit protagonists. Over a decade after Home on the Range went the way of its predecessors, and crashed and burned at the box-office taking in reportedly only half of its budget, there is seemingly nothing outstanding about it, aside from its historical title as last hand-drawn animated movie until The Princess and the Frog snagged that title. The story is straightforward, the action random, the comedy easy and all of it is as shallow as a Looney Tunes cartoon but without the instantly loveable characters.

Sure, there are some redeeming qualities. The animation itself is interesting in that it very successfully, though simultaneously ironically, harks back to the Disney animation style of the ’50s and ’60s. If anything, the lush colours, strong pencil lines and gorgeous features prove hand-drawn animation is something to be treasured, even when it shows off ordinary animals in an ordinary world. The music is decent, with Alan Menken, who is immortalised from Beauty and the Beast to Hercules, clocking back in to deliver show tunes in a movie that really doesn’t ask for them. No, for all that it has and is trying to do, Home on the Range won’t be remembered as the absolutely singular movie it actually is.

You go, cow girl
As far as the landscape of animation goes in the early 2000s, fresh with successes of Hayao Miyazaki and Pixar, the only movie that looks vaguely similar to Home on the Range is DreamWorks’ own flop, the infinitely more serious Stallion (2002) about a horse in the Wild West. Taking into account Disney was actively making boy-geared adventure movies, it can only be assumed that choosing to make the three cows women (opposed to, say, three masculine bulls) was done with comedic effect in mind.  The movie isn’t purposefully feminist but perhaps that’s not the point. Intended or not, the joke isn’t on the cows. 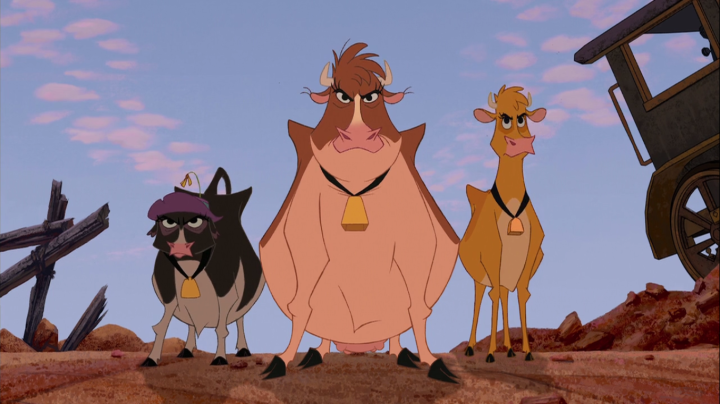 Displaying Roseanne Barr, Dame Judi Dench and Jennifer Tilly  as cows might conjur up unflattering associations but discard those and you have three strong female protagonists who get stuff done. Hate her or love her, Barr brings personality to the movie as the brazen Maggie. Dench is so good she makes a cow look classy while Tilly flat out steals the show as Grace. Though the movie puts up plenty of obstacles for the three ladies, some of which definitely stem from incapacity (or lazy writing), the characters do eventually triumph. It’s not the help of steed Buck (Cuba Gooding Jr.), buffalo Junior (Lance LeGault) or even the lucky rabbit Lucky Jack (Charles Haid) that these women succeed. It’s their own determination, confidence and, alright, a lot of stretching the laws of physics. More importantly, as uncomplicated as the characters are, their inner-conflicts don’t even mention the need for male partnerships or that their voice actors suggest an age of the characters at which there are endless social expectations. Their outer conflicts are with each other, highlighting their different personalities and convictions. Precisely because these women are mature and cows, they’re allowed to escape the clutches normally reserved for female protagonists.

“Step lightly, girls! The male of the species can be extremely hostile.” – Mrs. Calloway

How many times has animation gone out of its way to center on three adult, diverse women as infinitely more capable than any man in the story, while tackling conflicts that have absolutely no domestic, romantic or maternal footing? How many times has live-action? At the very least in the landscape where Home on the Range debuted it is practically unheard of. In 2004, of the top 25 grossing movies only the last bottom two (Million Dollar Baby and The Princess Diary 2) are headlined by female protagonists. In animation that year Shrek 2, The Incredibles, The Polar Express, Shark Tale, The Spongebob SquarePants Movie and Garfield: The Movie all grossed more, all with obvious male protagonists. As kick-ass as Fiona and Elastigirl are, without their marital hero spouse they would not get to shine. A look back at Disney’s own repertoire, staring with Snow White and the Seven Dwarfs and climaxing even with the feminist masterpiece that is Mulan, and indeed, three single ladies going on adventure together is unprecedented. That they aren’t pretty teens is downright revolutionary. Sure, as an afterthought the women are paired with male counterparts, but the budding friendship between the three  is the movie’s unapologetic heart. For that alone it’s absolutely singular.

A perfectly ridiculous storm of factors resulted in a underperforming, easily dismissible movie with a weird premisse that on top of it all, for a period, capped off an unprecedented movie legacy. Yet its worth isn’t in what it inadvertently became, but what it brazenly dared to do. Adult women certainly deserve more than to be depicted as cows and Home on the Range lacks the complex story world of Mulan or Lilo & Stitch to be considered a serious feminist milestone, for animation or otherwise. But in an animated movie landscape of grumpy ogres, adventurous tween boys and cute little girls there was never supposed to be a movie about three grown women protecting what they love. There are a hundred reasons to dismiss Home on the Range, but it’s enjoyable if only for making three unlikely female protagonists absolute heroes.