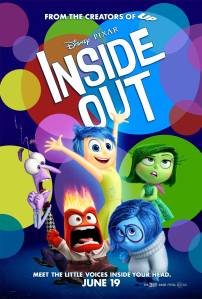 has a concept so delightful and brilliant it eclipses any rational, objective approach to the movie experience. Even with its flaws, this is the movie everyone should see.

For those who wonder if Hollywood is out of ideas, Pixar once again finds an unique narrative in even the most common of places. Inside Out answers that question that everyone has asked, without ever feeling like an after school special. What is really going on inside that mind of yours? Just this simple set-up makes for a riveting story, undoing years of convention that movies require the world to be at stake or cannot combine important social themes with entertainment. Inside Out in its very concept is small, intimate and dares to teach its audience something new.

Step back for a moment and think of all the moving images online, at school or on TV which sole purpose is to educate you. Government informercials, tutorials with life hacks, badly acted cautionary instructions, they all aim to make the information more accessible than an instruction manual. They will never, however, resonate the same way superheroes or rom-com couples do. Movies are seldom made with their full weight of impression in mind. Still, if you struggling to swim you probably remember Dory’s “just keep swimming” before any coastguard warningvideo. Which is why it’s so impressive that Pixar got it right with Inside Out. As its own advisers point out, the science behind the movie works like a charm. Not only that, it makes sense because of the movie. As any researcher can attest, findings take a while before settling into the collective mindset of society. And if you don’t study emotions or psychology on a daily basis, Inside Out’s logic opens up a world of information.

Everything in Inside Out is a near-perfect metaphor. The islands that shape personality. The glowing balls of memories. The pit where everything is forgotten. These are intelligent imageries, functioning story devices and they make sense to even the most inattentive viewer. Sure, there’s a lot of expositional dialogue but with this much real world relevance, Doctor and his team take the art of explanation to a whole new level. Enter Joy (Amy Poehler) the energetic, optimistic emotion that controls the mind of 11-year old Riley. She’s assisted by Fear (Bill Hader), Anger (Lewis Black) and Disgust (the always flawless Mindy Kaling). Then there’s Sadness (Phyllis Smith, in the role she was born to voice), who Joy finds tough to deal with. Whether it’s the chemistry of the voice actors or the notion that their struggle inside the mind feels so familiar, watching these emotions bicker is ridiculously entertaining. Everything makes so much sense and the movie uses this familiarity to it’s full fun potential.

When Joy and Sadness are swept away from the control center and have to find their way back through the maze of memories as Riley’s foundations, both in her life and in her mind, start to crumble, the movie actually starts to feel like a movie. It introduces a side-character, Bing Bong (Richard Kind), Riley’s imaginary but long forgotten friend. Strangely, this is where the movie’s brilliance falls short. There are just some conventions that even Pixar can’t shake, namely Joy’s mission to get back to the control center. Like any road-trip there’s a set of wonderful worlds the companions visit. So everything, even when it’s imaginative as a movie studio which produces dreams, feels like stalling. A pivotal moment in their journey plays out so predictably it’s, ironically, void of any emotion.

That’s to say that when the movie does get its story beats right, it hit home. Most importantly because of Sadness. Phyllis Smith is absolutely captivating, positively colouring the emotion so well she might just narrate your next bad day. It’s not just the appearance of the adorable, blue, comfortable sweater wearing Sadness. It’s the role she plays. Western society has become so mechanical in burying emotions, most of all Sadness, that, like Joy, it often doesn’t know what to do with it when it pops up. Even less so when you yourself are joyful but someone else is not. In probably the most important scene of the year, Joy tries to cheer up a sad Bing Bong to no avail. When Sadness shows empathy, sharing her foundation with Bing Bong rather than to repress it, Bing Bong actually lits up. If Inside Out teaches a generation of kids to embrace Sadness, it will have bettered minds in a way no science report ever could.

Inside Out takes viewers on a mind bending, but purposeful journey as Riley’s struggles become as huge and complicated as they often feel at that age. Pixar, under revolutionary guidance of Pete Doctor, offers up not just an entertaining adventure but a smart, impressive lesson. One not about morals, politics, or even the value of life; it’s about what you feel. As a generation of Circle of Life believers can attest, a movie can shape the mind of kids. Inside Out rather wants to explain the mind and as one of the rare outings of informative film, it actually succeeds at the task.