Naar de inhoud springen
When you enter the venue where Taylor Swift is about to perform you receive an electronic wristband. Once the room is full and the music starts all wristbands lit up and will continue to flicker with a bright palet of colours in perfect synergy with the sound throughout the night. The lights illustrate the connection the thousands of people have with each other: tonight they all want to be Taylor Swift’s friend.
Taylor Swift, whom you may know as that teen with the big blonde curls and a guitar, has grown up to an impressive, classy young woman. Swift’s life has been public knowledge for years now for even those who don’t care about it. Instead of cracking under the impossible pressures of female stardom, which demands women’s private lives are scrutinised with unequal ferocity, Swift has used her fame primarily to express gratitude to her fans. Whether she’s donating surprising sums to people with remarkable stories, or simply interacting with them online, Swift seems to have the new age of pop star status down. She doesn’t let her crowd wait for hours, like many mature artists do, nor does she succumb to the tired routine of ending a show without having played the biggest hit, letting the audience beg for more before closing out the night. She plays her own instruments, she most definitely can sing live and sports an tireless, disarming glistening in her eyes every second of her performance. She isn’t a world artist who’s chasing after god like immortality. She’s just a person who had a dream and isn’t stopping now it has become a reality.
After belting out the first few songs from her album 1989, the recordbreaking artist takes time to express her gratitude to fans for selling out the show and buying her music, practical topics she often famously and controversially speaks about. In that all but mandatory message that performers send out at the start of the show, thanking whatever city or country the show is at, it’s easy to become superficial. True, Swift uses flattering adjectives to wind up the crowd, but for the rest of the night she also interludes her songs with short stories. Some are video’s of some of her more famous friends who talk about their bond with Swift or topics like dating in the public eye or her cats, others are just Swift grabbing a mic and speeching to the audience like she’s at a wedding. The speeches are obviously rehearsed but whether it be because of Swift’s charming smile, her soothing, pleasant voice or that she rarely stops playing an instrument during the monologues, they never fail to feel sincere. More than just a comment on the endless venom spouted at her persona and her music in the media, Swift seems to genuinely want to connect with whoever bought a ticket to come see her.

In a room full of teenage girls with either her face on their shirt or her lyrics drawn on their clothes and bodies, Swift makes a remarkable effort to remind them she used to be one of them. She talks about someone not returning your What’s App immediately (“it’s just rude,” she quips) or people who are afraid to commit, while stating that anyone should be honored to date you. She also talks about the importance of female friendships, connecting to music on a bad day and finding magic and romance in solitude. Swift is less of a rock star flirting with the common crowd and more of a motivational speaker rallying for change. She knows her audience is listening and she uses her up close and personal time with them wisely. It’s a confirmation of what anyone who has blown past Swift’s ever changing cool factor among different demographics already knows; this is one intelligent lady. It’s the quick wit and self-referential humor she expresses in unscripted moments, like when one of her contact lenses shifts during a speech, that solidify her likability as a human being.

For all her social messages and intimate revelations, Swift doesn’t forget to put on a show. Every song features a significant style, from wardrobe to graphics projected on the big screen. The rotating stage makes sure every part of the room gets her attention. Most of all, her beautiful voice carries on like an unstoppable force of nature, whether she’s singing an updated version of one of her most famous older songs or shaking it off with her dancers and her band. Still, the songs are played endlessly on every popular radio station. The songs everyone knew already. It’s the talks that are new. Like the one about friendship with Taylor Swift only having two qualifications. One is liking her. The second is wanting to spend time with her. By her own definition, she reckons, everyone in the room is her friend. And as thousands of lights flicker in unison to the beat of her music, at least for a couple of hours, that sure feels true. 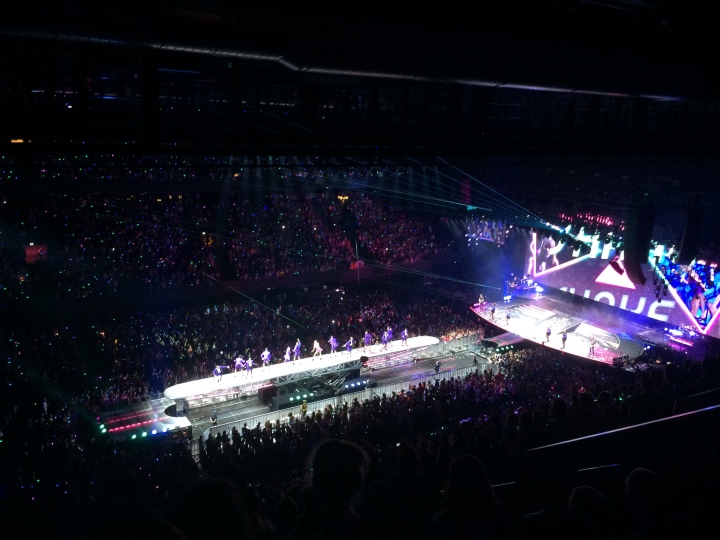